• Click here to purchase tickets or
• visit www.quicksilvertheater.com and www.ClassicsinColor.com 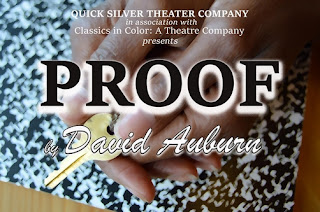 QST intends to reveal a new perspective of this Pulitzer Prize winning play. Without altering the text in any way and casting PROOF with actors of color, a conversation is generated that speaks to the issues of gender and racial privilege in global mathematics programs.

Catherine, a young woman relegated to caring for her father who suffers from mental illness, doubts her own sanity when faced with questions surrounding a mathematical proof discovered in her possession. Has she inherited her father’s mathematical genius as well as his mental instability? All is brought to light in this sexy and intriguing mathematical journey.

Founded by Nefessa Monroe, Classics in Color is a theatre company committed to representing all colors on stage, especially in the classics. Through its work the company hopes to demystify the classics and create accessible theatre to which we all can relate. CIC wants all people to be able to see themselves on stage; to feel included.

The mission of Quick Silver Theater Company is to produce theater that invigorates, educates and generates conversations. QST will cast its productions with actors that reflect the community at large. In doing so, the playwright’s work will, in turn, connect with a much larger and more diverse audience. Quick Silver Theater Company was founded by Tyrone Mitchell Henderson and Lizan Mitchell. It is an ensemble company of thirteen theater artists based in the NYC Metro area.

*Member Actors' Equity.
This production is an Equity Approved Showcase.