Food, Music & Film: Taste of Iceland fifth anniversary in Toronto from November 12 to 15 2015

Taste of Iceland celebrates its fifth anniversary in Toronto from November 12 to 15 2015
Annual event showcases the best in Icelandic food, music and film

TORONTO, ON – Celebrating its fifth anniversary in Toronto, Taste of Iceland touches down in the city from Thursday, Nov. 12 to Sunday, Nov. 15. Presented by Iceland Naturally, the event highlights the country’s renowned cuisine, music and film, including a free concert with Icelandic bands, a tasting menu featuring Icelandic ingredients and film screenings by Icelandic directors.

“Toronto is always so enthusiastic about Taste of Iceland, and welcomes Icelandic culture to the city with open arms,” said Kristjana Rós Guðjohnsen, project manager for the festival. “We’re excited to celebrate the festival’s fifth year here, with a great lineup that we can’t wait for everyone to experience.”

Cuisine
This year, Taste of Iceland brings noted chef Ylfa Helgadóttir to Toronto. Owner and chef de cuisine of the newly opened but much acclaimed Kopar, Helgadóttir has a delicious menu in store that she will present at Oliver & Bonacini’s Luma. Despite her young age, Helgadóttir has gained notable attention for her work. After apprenticing at one of Iceland’s top restaurants, Fish Market, she moved on to open Kopar, where she enjoys working with Icelandic products to find unexpected flavour combinations. She has received numerous awards and is also a member of Iceland’s national team of chefs, who won two gold medals at Expogast 2014. Chef Ylfa Helgadóttir will present an Icelandic tasting menu at Luma from Nov. 12 to 15.

On Sunday, Nov. 15, Luma will again host An Evening in Iceland - an interactive ticketed event showcasing the best cuisine Iceland has to offer. Join chef Helgadóttir along with Oliver & Bonacini’s Anthony Walsh and Michael Wilson for a meet and greet cocktail reception, followed by the four-course tasting menu. Chefs will walk guests through the menu while they dine at communal tables and are treated to a musical performance throughout the night. 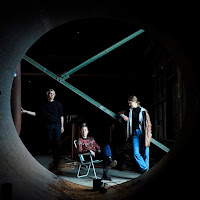 This year’s performers include Samaris, a trio that fuses glacial electronica and pulse-like beats with haunting vocals. The band won both the Icelandic Músíktilraunir and Kraumur Awards before the international release of their debut album in 2013.

Samaris are just one of the Icelandic bands performing at Reykjavik Calling in Toronto. Airplane and Spaceship is a refreshing one-woman act whose electronic space-music is a mix of playful beats, cool bass and high-pitched vocals. Her new album, Nótt á Hafsbotni, focuses on the magic and darkness of the deep ocean. Airplane and Spaceship will bring the magical darkness of the ocean to the Horseshoe Tavern on Nov. 14.

Film Screenings
Iceland Naturally will screen two Icelandic film programs specially curated by the Reykjavik Shorts & Docs Festival on Sunday, Nov. 15 at The Royal Cinema. The first screening will be a series of short films, followed by a documentary. Admission to the film screenings is free on a first-come, first-served basis and will be followed by a Q&A by the director of the film festival.