Natalia Clavier, the sultry-voiced singer we’ve heard fronting Thievery Corporation concerts around the world and on her own albums, brings us to her home town on her new album ‘Live in Buenos Aires,’ to be released on October 30. The album was recorded at a show in Buenos Aires at Teatro Del Viaje Mercado. 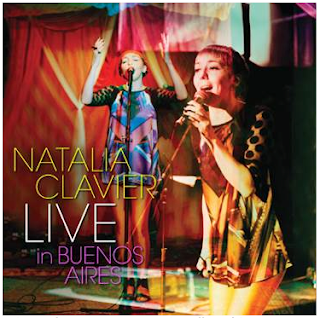 The show, as Natalia says, was a family affair. She had previously played in Buenos Aires with Thievery Corporation, but this would be her first time playing solo for her hometown audience. And, of course, no homecoming is complete without a family reunion—sitting at the keys during the show was none other than her brother, Pablo Anglade aka Polsik, who also did the musical direction and arrangements for the show and engineered the record.

Natalia’s signature jazz-inspired vocals and electronic textures are ever-present on this live album, with an extra touch of that live spontaneity and rawness that make you feel as if you were in Buenos Aires with her. The album features lives twists on familiar songs such as ‘El Tren,’ ‘Trouble,’ and ‘Every Time.’ Rounding out the album album are some funky bonus remixes of the songs ‘Lumen’ and ‘Cantanta’.