The members of Liquorsmith come together in San Diego, CA, although only one is permanently based there. The others come from San Francisco and as far away as New York City. The exercise seems worth it, however, if this kind of music is the result. 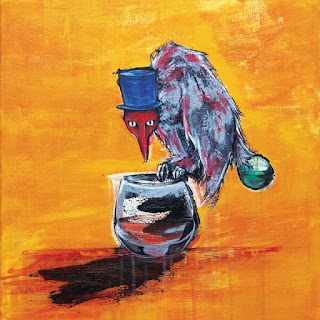 This Book Belongs To is their recent release, a six-track EP. The Liquorsmiths take the familiar and laid back folk/rock vibe and add a layer of musical complexity at all levels that elevates it well above the usual fare.

It begins with Coy With Me, a rollicking track with a swingy pulse. 'Laid back' is perhaps misleading; Get Well Soon (the lead single) trips along with an upbeat energy, the lyrics treading the territory of relationships and personal affairs in the folk tradition.

Take
Take all that I have
Give it away
Put dogs and shoes in its place
And I'll stay
Because here I have what I need...

There's a charming sincerity to Drew Thams' vocals; he plays it straight with the lyrics and it works nicely, giving his voice an expressive range.

I confess to a fondness for a country waltz and that's delivered nicely in Iris' Song and Thief offers an interesting rhythmic complexity. In a trio, everyone needs to do time and a half or thereabouts and the bar is set high for musical chops. That's clear on Devil I Do with its hypnotic groove.

The group usually performs as a trio with frequent guest appearances by friends and family. They've been performing along the West Coast and in the folk festival circuit and have shared the stage with a variety of artists at all levels, including Mike Pope, The Marshall Tucker Band, William Walter, John C. Reilly, and many others.

It's worth a listen if only for the drumming alone. Americana is a familiar genre, sure, but the Liquorsmiths manage to mine new territory within it. 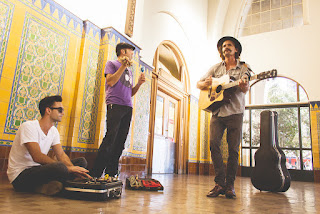 Using an Antique Typewriter, Egg Shaker, Toy Xylophone and a beat up guitar, The Liquorsmiths perform a Tiny Desk rendition of "Coy With Me."