New Orleans singer/pianist Henry Butler and trumpeter/arranger Steven Bernstein are two students of early jazz with decidedly modern voices. Together, with their band The Hot 9, they are setting new standards and writing fresh history. Blind since birth, Butler tells stories through the rise, swing, and rumble of his fingers as they channel sounds as diverse as his Louisiana birthplace: jazz, Caribbean, classical, pop, blues and R&B, among others. A giant among giants, he is a member of a special brotherhood that also includes Professor Longhair, James Booker and Allen Toussaint. His technical ability and expansive repertoire are legendary. 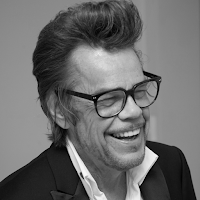 A veteran of New York City's downtown scene and a GRAMMY-winning arranger, Bernstein juggles a forward-looking perspective with a rooted sense of what's come before. Known for his work with The Lounge Lizards and SEXMOB, he's also the leader of the Millennial Territory Orchestra, a nine-piece ensemble that draws tunes and inspiration from the dance orchestras that toured the U.S. before World War II. "Their collaboration is both historically aware and fully prepared to cut loose," remarked The New York Times. (emcee Buster Poindexter pictured left)

The Town Hall is hosting a food drive in conjunction with Gotham Holiday Swing in partnership with City Harvest.  Their organization delivers food to nearly 500 emergency food programs including soup kitchens, food pantries, homeless shelters, AIDS care providers, senior centers, and children's daycare centers that serve hungry New Yorkers in all five boroughs.  We are honored to work in tandem to help those in need throughout our city.  On the night of the show we will accept dried food, food in boxes, cans, and bottles.  Patrons can find collection areas as they first enter the lobby.