Divine Art Recordings is delighted to announce this upcoming release - a full selection of the Piano Sonatas  by W A Mozart, performed on this 2-CD set by Diana Boyle, whose interpretations even of these well known works will speak anew to listeners. Diana has been deeply studying and meditating on these works in her remote secluded piece of paradise, to gain the fullest and most subtle understanding of every note.  The result is a performance of great delicacy, lightness and flair which has never been before created. 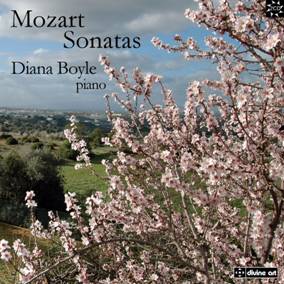 Diana Boyle is an English pianist who has lived and worked in the solitude of a Portuguese hilltop for many years. This secluded and magical location has created in her an inner peace and tranquillity, and the time to think deeply about her music, which shows through to wonderful effect in her interpretations of baroque and classical works. She strokes the keys with intense control, hardly ever using pedal, to create a sound which is warm and rich, never tense or agitated, and her fast passages are light and bright.

This double album (at mid-price) features eight of the Sonatas and in each case offers a wonderful performance which will be essential regular listening for even the most hardened of Mozart fans. We expect the critical response to be as positive (if not even better) than her previous two discs of music by Bach.