[JOHANNESBURG] Some of the world’s most interesting jazz innovators from 12 different countries will be on the bill at this year’s Standard Bank Jazz Festival, which runs in Grahamstown as part of the National Arts Festival from June 30 to July 9, 2016.

They will join a bill that includes powerhouse South African musicians such as the legendary Caiphus Semenya; Simphiwe Dana; the Afrika Mkhize Big Band; Swing City and Ringo Madlingozi.

The Standard Bank Jazz Festival in Grahamstown has grown in stature over the years and is now regarded as a serious international jazz festival that gives audiences a sense of the country’s jazz heritage as well as new trends emerging from both within the continent and around the globe. It also has some not-to-be-missed collaborations between visiting musicians and their local counterparts.

Caiphus Semenya has built a solid reputation as a musical director and composer having composed the scores for Roots and The Color Purple, for which he was nominated for an Oscar. He later worked on the score to Disney’s The Lion King.

Austrian singer, composer and trumpeter Michaela Rabitsch has been called a modern-day female Chet Baker by US magazine Jazzscene. With his intuitive, lyrical and well-balanced style, Dutch musician Toon Roos is considered to be one of the finest tenor and soprano saxophonists in Europe.

One of the goals of the Standard Bank Jazz Festival is to open up opportunities for networking and collaboration between the international performers and their South African counterparts. A major feature this year will be Afrika Mkhize’s Big Band, paying tribute to Bheki Mseleku, with musicians from around the country as well as foreign guests.

This year South African bassist and composer Carlo Mombelli joins forces with three young Swiss musicians, led by trombonist Andreas Tschopp, who studied trombone at the Music Academy in Basel under Adrian Mears, a long-time collaborator with Mombelli. Cape to Calais is a not-to-be-missed collaboration between the established French duo of Daniel Mille (accordion) and Stéphane Chausse (clarinet), who will be joined by Dutch master bassist Hein van de Geyn and South African guitarist Dave Ledbetter.

Says Hazel Chimhandamba, head of Group Sponsorships at Standard Bank: “We are delighted with the 2016 line-up which features more than 100 top musicians. We are delighted that the Festival continues to draw jazz lovers from around the country as well as being a tool to grow young jazz musicians in South Africa.”

Grahamstown National Arts Festival
30 June – 10 July 2016
The Grahamstown National Arts Festival held in late June or early July every year, is South Africa's oldest, biggest and best-known arts festival. The small university city of Grahamstown is situated in the Eastern Cape, 130 km from Port Elizabeth. The 11-day event offers culture hounds every indulgence of theatre, music, song, dance, film and a whole lot more. If there's one South African festival you have to attend, this is it. 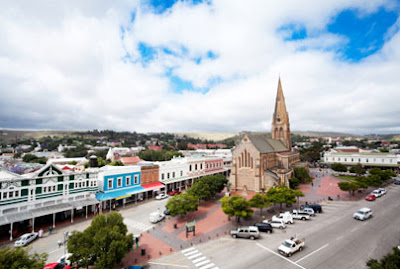 Organised by the National Arts Festival team, Africa's largest and most colourful cultural event offers a choice of the very best of both indigenous and imported talent.

Every year for 11 days Grahamstown's population doubles, as people flock to the city for a feast of arts, crafts and sheer entertainment. Every hall or large room becomes a theatre, parks and sport fields become flea markets, normally quiet streets have to be managed by an army of temporary traffic wardens, and every available bed in the city is booked. The festival offers more than 600 shows from opera, cabaret, drama and jazz to stand-up comics and folk music.

Bartholomew's Loft
1A St Bartholomew St, Grahamstown, 6140, South Africa
+27 82 448 2971
This value-priced 3-star guesthouse is set in 3 quaint, 19th-century buildings with whitewashed walls. It's located in the artisans' quarter less than 10 minutes' walk from the storied Cathedral of St. Michael and St. George. Accommodations range from rooms with en suie bathroom, a 1 bedroom with a kitchenette and a 3-bedroom with a kitchen and living room. There is also a a cottage with two suites that feature a private courtyard.