TORONTO - The 17th Annual imagineNATIVE Film + Media Arts Festival is proud to announce its visual art programme including installations, exhibitions and the annual Art Crawl with artist talks on October 21, 2016 at the renowned 401 Richmond Building.
imagineNATIVE will present the Canadian exhibition premiere of Wairua, featuring three works relating to the Māori concept of the soul by artists Rona Ngahuia Osborne and Dan Mace. The three works on display at A Space Gallery will include: Te Taki, a video installation where the viewer is greeted by Māori warriors and the taki, a fundamental aspect of formal pōwhiri (ritual of welcome); Whetūrangi, an immersive audiovisual installation that explores a cluster of seven stars known in New Zealand as Matariki, and presents them in the form of seven women who reflect characteristics of the star she represents; and Elemental, consisting of four projections of the elements HAU (air), WAI (water), AHI (fire), and WHENUA (earth) with moving portraits and looping textures. 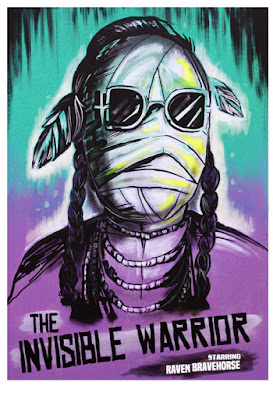 imagineNATIVE will also present Indigenous Movie Monsters by multimedia artist Jay Soule, aka CHIPPEWAR, with four pieces from the 10-part series that indigenizes the classic horror movie poster. Each work – at the A Space Gallery Windows – offers a genre-specific commentary on the representation of Indigenous peoples on the silver screen, particularly in the early decades of cinema, with Tribe of Dracula, Curse of the Cayuga, Bride of Frankensioux and The Invisible Warrior.

The imagineNATIVE Art Crawl – supported by the Indigenous Visual Culture Program at OCADU – returns with seven stops at five galleries on Friday, October 21. In addition to Wairua and Indigenous Movie Monsters, the Art Crawl will also feature Folding Forced Utopias For You, about Indigenous architecture and the forced resettlement of arctic communities in Canada, Greenland and Russia; Ore Body, investigating how value of land and resources is created and assessed through Western measures of wealth; wnoondwaamin | we hear them, uses sound waves created by three artists to access knowledge and memory; and Goldilocks tahnon Ohkwari, a video installation that addresses issues surrounding colonization and language preservation with an adaptation of the popular fairy tale Goldilocks and the Three Bears told in the Mohawk language with English subtitles.

The Art Crawl will make a final stop at Artscape Sandbox for Records and Reconstructions: Lindsay McIntyre's Portraits in Process, which features a live performance followed by a screening of works by McIntyre, and films she has chosen that speak to her own art practice.

More programming for the 17th Annual imagineNATIVE Film + Media Arts Festival will be announced in the coming weeks.

The imagineNATIVE Film + Media Arts Festival is the world’s largest Indigenous festival showcasing innovation in film, video, audio and digital media. The Festival presents the most compelling and distinctive works from Canada and around the globe, reflecting the diversity of the world’s Indigenous nations and illustrating the vitality and excellence of Native art and culture in contemporary media.