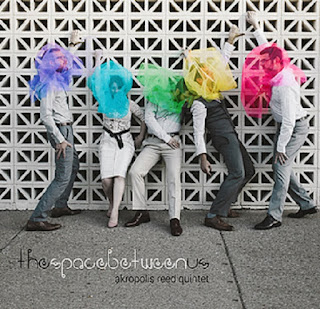 Does it sound disrespectful to say a new music release can be a highly entertaining listen? I hope not, because I was entertained, cajoled, intrigued, and transported in probably equal measures by The Space Between, the new release from the Akropolis Quintet.

I loved their playful take on the iconic themes of classical European music. In the first track, jesus is coming, you hear a sampled child's voice over a strongly rhythmic pulse of wind instruments, with other spoken voices and snippets of dialog, shouting, children crying...It sounds like a dog's breakfast but turns out to be a seamless fabric of sound that cries out for a modern dance interpretation.

Refraction ties dissonant harmonics and a fluid sense of melody together with a hypnotic rhythm. It's a highly evocative piece in several sections. At the base of it all is a superb sense of musicianship that allows for the complex texture of the music.

The mood turns elegaic on Gallimaufry, with its sinuous interplay of melodies on the various instruments. The album closes with John Steinmetz’s “Sorrow and Celebration,” which imitates a ceremony or ritual, calling people together to mourn and rejoice.

The Space Between Us is the third studio release from Akropolis Reed Quintet, a group with a singular instrumentation, well on its way to redefining how modern wind chamber music groups present classical music. It’s an album about conflict and resolution, a story of how art and its reflection on life can bring people together. 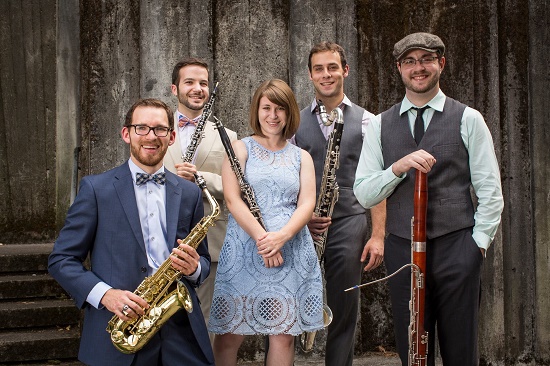 Formed in 2009 at the University of Michigan and winner of the 2014 Fischoff Gold Medal, the Akropolis Reed Quintet takes listeners on extraordinary imaginative musical adventures. They have commissioned more than 25 new reed quintet works, published a catalog of original and arranged reed quintet sheet music, and have garnered more than 22,000 online views for the Web Premiere video series of new reed quintet repertoire. Akropolis injects its dynamic repertoire into communities and schools around the country, and in 2015 won the Fischoff Educator Award. The group was recently awarded two grants from Chamber Music America and the Michigan Council for Arts and Cultural Affairs for a January 2017 community residency in Detroit.

Woodwind instruments tend to be neglected overall in the musical canon of any genre; it's nice to hear the fresh innovation of this appealing collection of new music compositions.