Review Steven Allen Gordon: All Over the Map - Music for Solo Guitar and Solo Viola 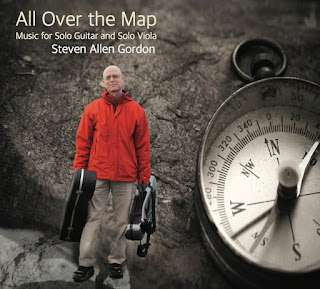 This release by Bellingham, WA based Steven Allen Gordon is a collection of pieces from various eras and genres of music, played largely solo by the long time musician. He plays viola (Bach, Ralph Vaughn Williams and William Walton) as well as music for classical guitar (Bach, Villa-Lobos and Tárrega), steel-string acoustic guitar (Laurence Juber), and electric guitar (Bach and Joe Pass). It's an interesting collection of pieces from an accomplished musician.

Electric Bach: Prelude in D Major is the least successful. While technically proficient, Bach loses some of its resonance in such a clean electric guitar version. The intricacy is there, but not the depth. But, that's the only quibble among the tracks.

The Prelude No.1 in E Minor by Heitor Villa-Lobos on classical guitar is engaging. It's virtuosic playing with sensitivity, and an impressive range of tone and volume.

The viola pieces are really nicely handled. It's Gordon's main instrument, and the sound is rich and resonant on repertoire by J.S. Bach repertoire originally written for cello. With its lower tone, the viola doesn't have that sweet, high upper edge of the violin. The tone has a slightly mournful cast to it. Breaking Point by Laurence Juber is one of the highlights of the release, a bluesy tune on steel string acoustic guitar with a strong rhythmic pulse. The Ralph Vaughn Williams piece, accompanied by piano is another high point. It's beautifully fluid and expressive.

Gordon is an accomplished musician and displays a nice range of styles through the release. In 1998, Steven completed a Ph.D. in Historical Musicology from UCLA. He's played viola professionally for over three decades, and his experience includes many concerts with a variety of orchestras, chamber ensembles and music festivals.

During the same time period, he's also worked in the recording industry, and has played on hundreds of film scores, numerous TV shows and a variety of pop, rock and several jazz albums. 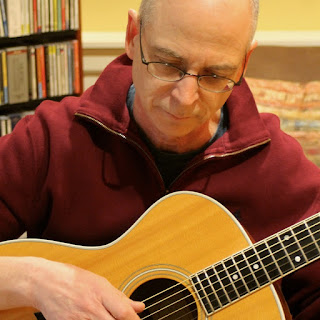