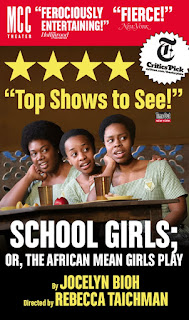 NEW YORK CITY - Paulina, the reigning Queen Bee at Ghana's most exclusive boarding school, has her sights set on the Miss Universe pageant. But the mid-year arrival of Ericka, a new student with undeniable talent and beauty, captures the attention of the pageant recruiter--and Paulina’s hive-minded friends.

How far would you go to be queen bee?

Jocelyn Bioh (Playwright) is a Ghanaian-American writer/performer from New York City. NYC acting credits include: In the Blood, Everybody (Signature, Lortel Nomination), Men On Boats (Playwrights Horizons), An Octoroon (Soho Rep), Neighbors (The Public Theater), and The Curious Incident of the Dog in the Night-Time which won the Tony® Award for Best Play in 2015.
african playwright black theater new york city playwright off broadway theater in new york city