• Tour cities to include Berkeley, Boston, Cleveland, Los Angeles, New York, Santa Barbara, and Washington DC, among others
• Check out the full schedule at the link

NEW YORK, NEW YORK (January 26, 2018) — An ambassador for China’s vibrant cultural heritage, pipa virtuoso Wu Man embarks on a twelve-city U.S. tour in March with the Huayin Shadow Puppet Band, whose traditional shadow puppetry and music she discovered in rural China while unearthing ancient art forms to preserve and bring to international attention. This group, formerly known as the Zhang Family Band, continues a centuries-old tradition of blending music, drama, and classic Chinese shadow puppetry, but was little known outside the mountains of northeastern China until Wu Man brought them to Carnegie Hall in 2009 and now to the wider U.S. The concert program features Wu Man performing both solo and with the Huayin Shadow Puppet Band. 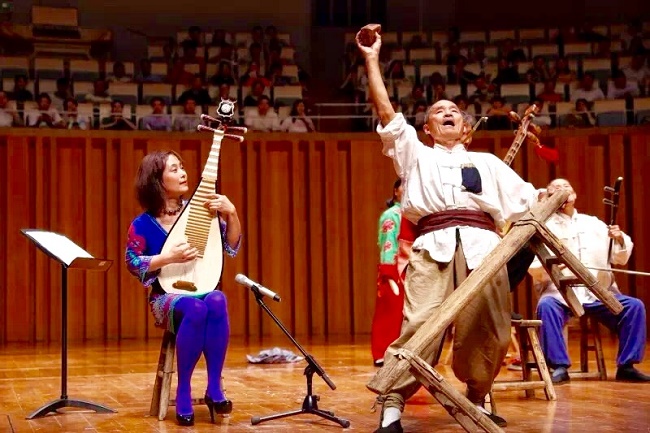 As seen in her documentary Discovering a Musical Heartland, Wu Man has traveled regularly since 2007 to China’s remote regions to uncover the country’s ancient musical traditions that are in danger of being lost, including the traditions of the Huayin Shadow Puppet Band. The band comprises farmers from Shaanxi Province’s Huayin County in a rural village at the foot of Mount Hua in northwest China. For more than 300 years the Huayin Shadow Puppet Band has toured the countryside, bringing its rugged shadow puppet plays that call to life the mythical heroes and gods of the oral folk culture of Shaanxi, often evoking famous battles of the Tang dynasty (618-907), temple fairs, and rituals.

The shadow puppet plays are accompanied by “old tune” (laoqiang) traditional music with guttural and high-pitched singing (by senior singer Zhang Ximin) with a rough, mad spirit; percussion including clappers, cymbals, and gongs; stringed instruments including the yueqin (moon-lute) and fiddle; the shawm, a double-reed instrument similar to the oboe; and a natural trumpet.

Wu Man and the Huayin Shadow Puppet Band in trailer to Discovering a Musical Heartland (segment begins at 6:35)

Wu Man is the world’s premier pipa virtuoso. As a soloist, educator, and composer, she has given her lute-like instrument—which has a history of over 2,000 years in China—a new role in both traditional and contemporary music. She has premiered hundreds of new works for the pipa while spearheading multimedia projects to both preserve and create awareness of China’s ancient musical traditions. Her collaborations with musicians from wide-ranging artistic disciplines allow her to reach diverse audiences as she works to break through cultural and musical borders. For more information, visit wumanpipa.org.