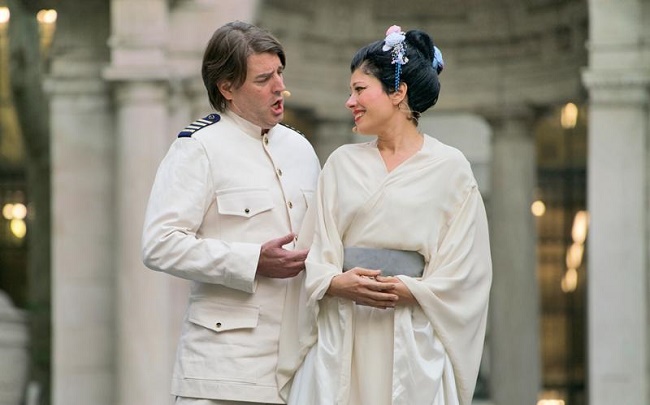 The New York City Opera series at Bryant Park Picnics continues with this hour-long presentation of highlights from Giacomo Puccini's classic opera, Madama Butterfly. Offered to the New York public free-of-charge, this presentation is a perfect introduction to opera for newcomers of any age.

Tenor Alex Richardson made his Metropolitan Opera and HD as the Shepherd in Tristan und Isolde and returned as the 2nd Jew (Salome). This season at the Met he participated in The Exterminating Angel and Parsifal; was Flaminio at NYCO's L'amore dei tre re; recitalist in Florida and was Alfredo (Traviata) with the Philharmonia Orchestra of New York. Active roles include: the roles of Peter Grimes, Werther; Cavaradossi, Tamino, Rodolfo, Roméo, Alfredo, Duke, Rinuccio, Alwa (Lulu), Vana Kudrjas (Kata Kabanova), Molqi (The Death of Klinghoffer), Vaudémont (Iolanta) and Steuermann (Der fliegende Holländer). He can be heard in the title role of Amleto (Hamlet) by Franco Faccio recently released by Opera Southwest.

Korean born Mezzo-Soprano Yoojin Lee has delighted audiences with her blend of a powerful voice and stage presence. Her career started at Mannes College of The New School for MM and PSD in 2009-2013. She is currently a member of Metropolitan Opera Ensemble and is an active member performing since 2016. Ms. Lee has also performed many various repertoires, classic to contemporary music at Mannes College and other programs, IVAI in 2013, Prelude to Performance with Martina Arroyo Foundation in 2014 and Caramoor festival in 2016 and 2017. Recently she performed in the premiere of Sirens and Gulliver's Travels by Victoria Bond at Symphony space and American Opera Projects in New York City. Also, a special performance at the New York Public Library. Recently Ms. Lee performed "The Dinner Party" Mini-Operas Inspired by Judy Chicago with NYU Tisch School of the Arts as a soloist this May.

Baritone Michael Weyandt continues to engage audiences with his "virile, ardent" singing and "notable characterizations" in a repertoire that spans from Handel's earliest to living composers' latest works. He most recently made his first appearance with the acclaimed International Contemporary Ensemble in the posthumous premier of Pauline Oliveros's and IONE's "phantom opera," The Nubian Word for Flowers. He also recently debuted with New York City Opera in Angels in America and Hawaii Opera Theater in La Bohème, the premiere of a new work with his multidisciplinary troupe the Atelier at JACK in Brooklyn, performances of Eight Songs for a Mad King and Kagel with the Talea Ensemble, and the staged premiere of selections from When Adonis Calls for Opera America's New Works Forum.

Hailed by Opera News for her "sumptuous, mid-weight soprano," and The New York Times' Anthony Tommasini for her "warm, ample voice," "ravishing performance" and "distinctive earthy coloring," Brandie Sutton began her professional career with a solo recital in the province of St. Maarten and many presentations of Handel's Messiah around the United States. Ms. Sutton has appeared on opera stages such as Semperoper Dresden, Palacio de Bellas Artes, Hamburgische Staatsoper, Grand Théâtre de Genève and Alter Oper Frankfurt. She has also made her solo recital debut at the John F. Kennedy Center for the Performing Arts in Washington, D.C., Merkin Concert Hall in Lincoln Center and concert debut at Carnegie Hall. She has performed with the National Symphony Orchestra, Royal Danish Symphony Orchestra, the Radio Orpheus Symphony Orchestra in Moscow and the Krasnoyarsk Philharmonic Symphony Orchestra. Ms. Sutton has also debuted with Wynton Marsalis and the Jazz at Lincoln Center Orchestra.

New York City Opera at Bryant Park continues this summer with a never-before-seen sneak preview of City Opera's season opener, Robert Ward's The Crucible (August 28) and an hour-long performance of highlights from Rossini's The Barber of Seville (September 17).

Location and Directions:
Bryant Park is situated behind the New York Public Library in midtown Manhattan, between 40th and 42nd Streets & Fifth and Sixth Avenues. Take the B, D, F, or M train to 42nd Street/Bryant Park; or, take the 7 train to 5th Avenue.