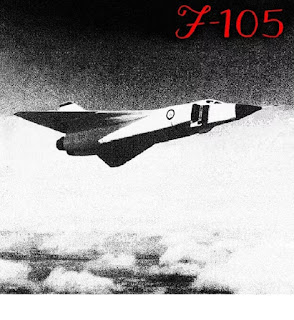 Lyrics that turn both rebellious and reflective, and an idiosyncratic world view meet catchy retro pop rock in this debut release by F-105, a new alt-rock project from veteran Toronto musician Din. It's a new musical outlet for Din after completing his 15 year journey with his band The Soles. Din writes all the songs on the album.

Rebel Girl is the first single, a bouncy rock ballad with a retro groove. Octave harmonies and the strong rhythmic pulse reveal the indigenous heart of the music on songs like Desert Planet, where the desert becomes a metaphor for emptiness and ultimately the clarity that can come from it.

The album’s lead single ‘Rebel Girl/Desert Planet’ got a big boost in popularity with a Star Wars connection in the video. The track received wide coverage and critical acclaim in with the group’s growing global Star Wars / geekdom fanbase, including extensive play and interviews on a wide variety of popular Star Wars podcasts. 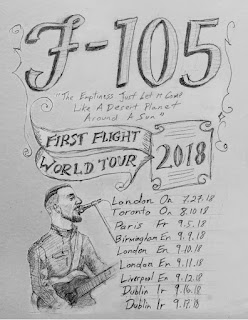 There's stylistic variation through the album that keeps it interesting. Mileage is a bouncy pop rock track about love and the road, while October 1st is a bright, dancey song.

Din's vocals are raw and expressive. Viljo and Elsa is a highlight of the album, a mesmerizing waltz about Finnish immigrants coming to Canada in the early 10th century. It's a tribute to the contributions of ancestors.

Din is backed by an veteran band of collaborators on the release, including production and engineering from Marc Meriläinen, who also contributes lead guitar, kantele (a Finnish instrument,) bass, and keys. Alex Milne is on co-production and engineering credits, along with drums, bass, and keys, and Kelly Fraser adds her vocals to the bonus track, a Steel and Gold Mix of Desert Planet. I loved her sexy and sinuous vocal additions to the song in a dance mix mode.

It's a cool new release from a veteran talent. Din and F-105 are on tour in Paris, Birmingham, and London through September - keep up with them at the link.