TORONTO – Following the success of its trailblazing first season, Future History returns to explore stories of Indigenous communities at the forefront of the reclamation movement in Canada. Future History, Season Two (13×.30)  premieres Tuesday, May 14 2019, at 8 p.m. ET exclusively on APTN East and 8 p.m. MT on APTN West. 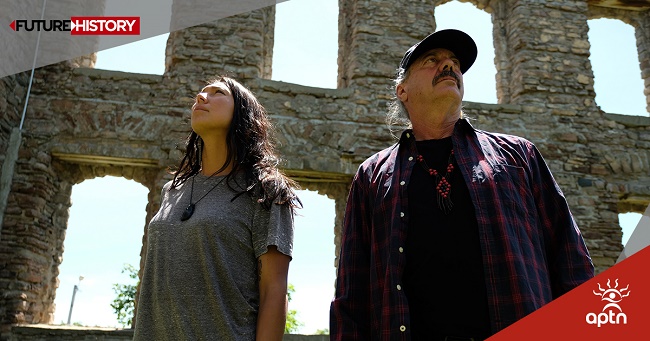 This smart, heartfelt docu-series is produced and directed by award-winning Canadian producer and actress Jennifer Podemski (Empire of Dirt, Dance Me Outside, Cardinal, Degrassi: The Next Generation) and co-produced by Geoff Ewart (Empire of Dirt, The Associates, The Border). Future History is written by actress and writer Tamara Podemski (Coroner, Heartland, Four Sheets to the Wind) and co-hosted by notable Indigenous activist and artist Sarain Fox (RISE) and Kris Nahrgang, an archeologist reclaiming his identity. The co-hosts bond together as they explore their own biases and beliefs, journeying into Indigenous communities to meet innovators who are harnessing Indigenous Knowledge as a way to rewrite history and transform their future, ultimately reconnecting with their land and heritage.

“We’re thrilled to be back for a second season, sharing the incredible and inspiring ways these communities are shaping the future with wisdom from their ancestors,” says Jennifer Podemski, President of Redcloud Studios Inc. “In Season Two, our storytellers delve deep to share differing Indigenous perspectives and open the conversation to provoke dialogue and debate.”

Audiences this season can expect to be captivated by a 13-year old water activist and cultural warrior; find joy and get down at a youth dance and music workshop; hear valuable and compassionate stories from a suicide prevention and intervention organization and understand how Indigenous Knowledge is implemented in cutting edge social science research, childbirth and prenatal care, just to name a few. A full list of episode descriptions is available here.

More about the series’ producer/director and co-hosts:

Jennifer Podemski,
Producer & Director, Future History
Of mixed First Nations and Israeli descent, Jennifer’s acting credits include Cardinal, Hard Rock Medical, Degrassi: The Next Generation, Fire Song, Sensitive Skin, Blackstone, The Diviners, and Dance Me Outside. She has produced titles including Mocassin Flats, The Other Side, Empire of Dirt as well as the The Indspire Awards. Jennifer owns and founded Redcloud Studios Inc. which produces Future History as well as APTN’s famed paranormal series The Other Side. Jennifer has been nominated for numerous Canadian Screen Awards and in 2018 was awarded ACTRA Toronto's 2018 Award of Excellence.
Sarain Fox,
Co-Host, Future History
Sarain is of Anishinaabe lineage and a multi-faceted performer and passionate spokesperson for her culture and community. Sarain was cast as Sacheen Little Feather in The Andy Warhol Interview Project, involved in the ARG re-release of the CBS TV drama Jericho and is the host of RISE on Vice Canada. As a fashion model she has graced the front covers of PIE, Redskin and Spirit magazines. She is a member of United Collective; a New York City based Australian aboriginal modern dance collective and a member of Khawaii Dance Theatre.

Kris Nahrgang,
Co-Host, Future History
Kris is Mississauga (Ojibway) with Treaty Status held at Curve Lake. A multi-disciplinary artist in wood, stone and traditional oil mediums, Kris’s work is found in numerous private and corporate collections including Prime Minister Justin Trudeau and singer Anne Murray. In 2017, Kris was commissioned by the Canadian National Exhibition to produce a 36’ UNTY POLE (totem) which received national and international acclaim from both the public and media.

Future History is made possible by the generous support of Canada Media Fund (CMF), Rogers Documentary Fund and APTN.