This impressive release from conductor Matthew George and the Minnesota-based University of St. Thomas [UST] Symphonic Wind Ensemble showcases the glorious possibilities of the symphonic concert band, an often neglected and even maligned ensemble. Tight, brilliant playing by the ensemble and soloists make the most of the palette of instrumental colours and dramatic possibilities. 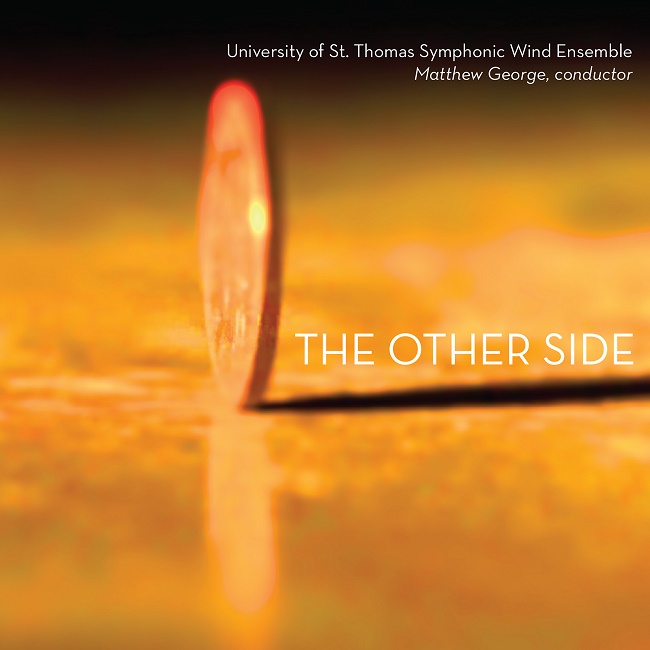 B-Side Concerto was commissioned by George and the ensemble. By Spanish composer Luis Serrano Alarcón, the first track, incorporates all the drama and instrumental colour that you could ever expect from a concert band. Take elements of classical music, add grand themes along the lines of movie music, then a slide into a jazzy electric guitar solos and the fat sound of a Hammond B3 organ...The combination of concert band and rock/jazz fusion ensemble somehow create a seamless flow of music that explores the emotional ranges of both.

Nigel Clarke was inspired by the artwork of René Magritte, when he wrote his Mysteries of the Horizon, naming the four movements are named after some of his paintings - The Menaced Assassin, The Dominion of Light, The Flavour of Tears, The Discovery of Fire. The recording features Belgian cornet soloist Harmen Vanhoorne, for whom Clarke wrote the piece. Harmen dazzles as he leads the ensemble through a piece that ranges from strident to mystical and trance-like in mood, with a gorgeous tone.
Everything Starts from a Dot, by British composer Kit Turnbull was also inspired by visual art, in this case the work of Wassily Kandinsky. The piece captures a bouyant brightness of tone and playfulness in the spirit of the Russian painter.

Serrano Alarcón’s Second Symphony for Wind Orchestra, another commissioned piece, pays tribute to the great Russian Romantic composers. Made up of four movements, the Symphony evokes the majestic scale of composers like Tchaikovsky and Rachmaninoff with a sweeping kind of narrative.

With a count of over 90 commissioned works for band, Matthew George and the University of St. Thomas Symphonic Wind Ensemble are filling a void in the musical world with intriguing works and splendid performances.