Toronto, ON …. On Thursday, October 14 at 7:30 pm EST, Canada’s music community came together for a virtual, musical discovery party to celebrate the launch of Picanto.ca, an innovative new digital platform for creative music content. Created by the Canadian Music Centre (CMC), Picanto.ca brings together a world of new and uncommon music from diverse genres through music videos, documentaries, educational videos, and live-streaming events. A new and exciting hub for Canadian creative artists and the music community, Picanto.ca was created by and for Canadian music lovers.

“Discovery has always been at the heart of the Canadian Music Centre,” comments Glenn Hodgins, President & CEO, Canadian Music Centre (CMC), “About 10 years ago it was becoming clear that the world of broadcasting and recording classical, jazz, and contemporary music was in decline. Over the next decade, it would all but disappear. While we already knew that there was a need for a cohesive digital dissemination strategy for Canadian music in these genres, it has become especially important coming out of the pandemic, where the music industry has been severely impacted. Picanto.ca fills the need to create a connection that has been lost from the music back to communities and fits perfectly with the CMC’s role as a publisher, a recording label, and a champion for Canadian music.”

On Thursday evening, event hosts Céline Peterson, a producer, artist representative, and jazz ambassador; and Marie-Annick Béliveau, an accomplished mezzo-soprano with a specialty in contemporary repertoire, showcased a selection of the platform’s nine musical categories which include: jazz/improvised; Indigenous; inter-cultural; sonic exploration/musique actuelle; electroacoustic, vocal/choral; chamber music; opera; and orchestral music. In addition to a site demonstration, the hosts sampled some of Picanto.ca’s current and diverse musical content, including drumming from Uzume Taiko, Canada's first professional Taiko group; music for three trumpet soloists and orchestra by Vancouver composer Anna Pidgorna and presented by Soundstreams; “All Could Change,” composed and performed by Montreal-based jazz vocalist Sarah Rossy; a new work by Indigenous composer Raven Chacon as performed by Vancouver’s Black Dog String quartet; and a striking video for “A Little Loopy” by Frank Horvat, performed by harpist Sharlene Wallace, to name just a few.

Picanto.ca – a blend of the words piquant (“having a pleasantly sharp taste or appetizing flavor”) and canto (“sing” in Italian), with an emphasis on the “can” for Canada – aims to nurture, support, and showcase Canadian creative talent at home and abroad. A hub for the contemporary music community, Picanto.ca provides a place for targeted enthusiasts who seek out contemporary music, reaching far beyond the short-form and song-based music that is already available everywhere else. It is a place for discovery of music that is contemporary, creative, and Canadian – and belongs on the international stage.

This fall, Picanto.ca invested in a pilot project for the creation of 7 new music videos which will be premiered on Picanto.ca in early 2022. The 7x Festival is the first of many projects to support artists on the new platform. Following an overwhelming response from artists and creators, 7 productions received an investment of $5,000 in video production fees.  Additional initiatives coming soon are pay-per-view videos and events, and livestreaming of performances.

Picanto.ca is made possible with support from the Canada Council for the Arts, Canadian Heritage, the SOCAN Foundation, the Ontario Arts Council, and the Toronto Arts Council. The Canadian Music Centre, Tim Brady, and Le Vivier worked collaboratively to develop Picanto.ca. Many thanks to Picanto.ca Operation Lead, Stephanie Conn, and the Picanto team and staff at the Canadian Music Centre. 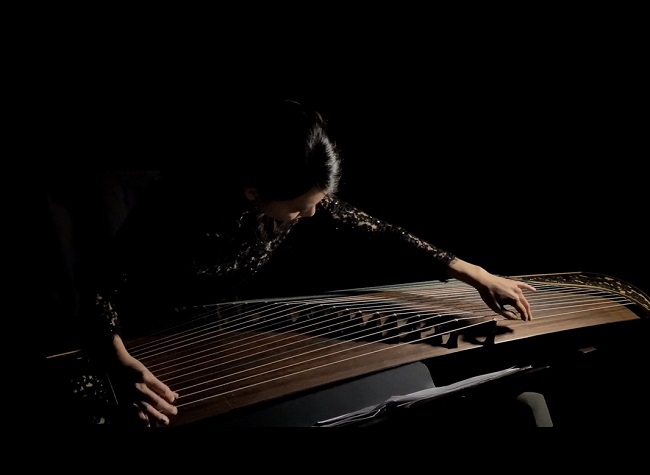 Dailin Hsieh Zheng, from the Canadian Music Centre BC’s Unaccompanied concert series, in partnership with Redshift Music Society of live performances of Canadian works for solo instruments.
(Photo credit: Jordan Nobles)
The Canadian Music Centre is a catalyst that connects you to the ever-evolving world of Canadian musical creation through performance, education, and promotion. The CMC provides unique resources for exploring, discovering, and performing Canadian music. We are passionate about nurturing a musical community that honours our legacy and supports the professional development of Canadian musicians and composers.
classical music digital platform indigenous music jazz