Asheville, NC, November 2022 — Originally released in 1970, the Minimoog Model D changed the face of modern music and has served as the archetype for all synthesizers that followed.

The all-analog instrument gained acclaim for combining the colossal sound of the 1960s Moog modular synthesizers with the accessibility of pre-wired modules, meaning that it could be played instantly and intuitively with no patch cables required.

More than a half-century since its invention, Minimoog Model D is back in production at the Moog factory in Asheville, North Carolina. An exceptional sonic tool and one of the most beloved and iconic synthesizers ever designed, it returns to inspire the next generation of electronic musicians. 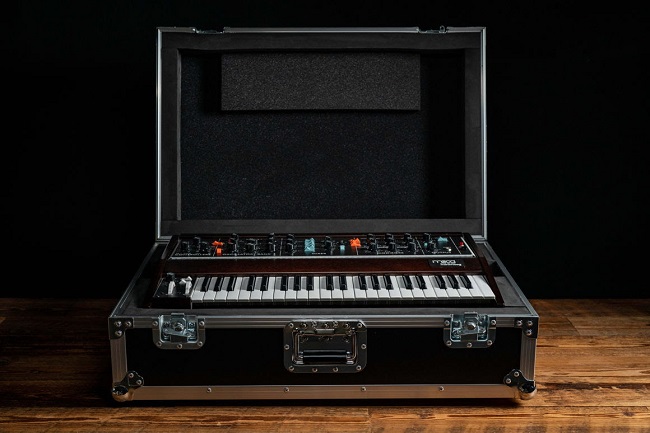 The coveted sound engine and audio signal path remain identical to the Model D that Bob Moog and his team engineered in the 1970s. This latest edition of the instrument also includes the series of popular functional modifications from the 2016 production run that expanded this storied synthesizer’s capabilities. These modifications include a dedicated analog LFO with triangle and square waveshapes, a premium Fatar keybed with velocity and after pressure available via top panel CV jacks with onboard trimpots, MIDI integration, improved pitch wheel calibration, and a mixer feedback modification which allows the Minimoog Model D to overdrive and scream with the turn of a knob. ​

Plus, for the first time in its history, the Minimoog Model D now features a spring-loaded pitch wheel that returns to center upon release. This enhancement—a popular artist request—allows for improved playability and wild performance flourishes. This newest edition also includes updates to the MIDI functionality, allowing for improved modern studio integration.

The three-oscillator, monophonic, analog synthesizer is securely housed in a locally sourced Appalachian cherry cabinet with a legacy-inspired walnut stain and hand-finished aluminum chassis. Sounding as vibrant and deep as ever, its legendary low-pass ladder filter, powerful oscillators, and rich saturating mixer retain the exact component placement and through-hole design of a 1970s-era Minimoog Model D. 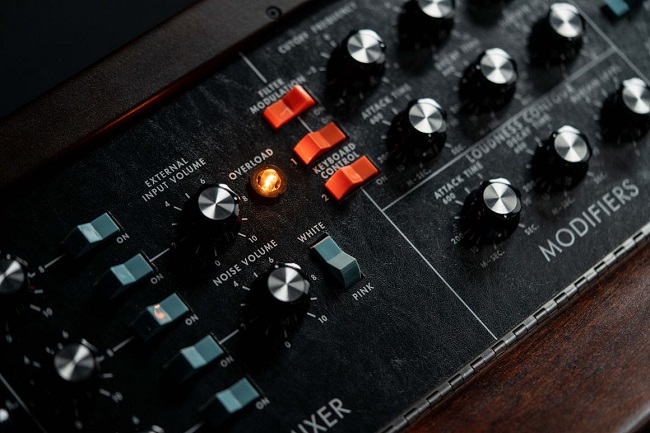 A Sound for the Ages: Model D’s Five Decades of Influence

A stage and studio staple for 52 years and counting, the Minimoog Model D is a key piece of music history that continues to inspire artists of all genres, cultures, and ages around the world.

Electrifying funk and disco during the 1970s, enabling new wave in the 1980s, anchoring the sonics of techno and hip-hop in the 1990s, and transcending genres since the turn of the new millennium, the sounds of the synthesizer are now as ubiquitous in music as the human voice.

The Minimoog Model D specifically has been used by some of the most innovative musicians of our time. Bernie Worrell used the instrument as a foundation of Parliament Funkadelic’s futuristic sound.

Kraftwerk employed Model D on the pioneering concept album Autobahn, defining an entirely new genre of electronic music. Gary Numan replaced his live band’s guitars with Minimoogs, creating the prototype for industrial music. The classic sound of the Minimoog Model D can be heard on Bob Marley’s Catch a Fire, David Bowie’s Low, and Dr. Dre’s The Chronic, to name a few. ​

Few instruments have been as impactful to the world of music as Minimoog Model D. Now available to a new generation of creatives, the legacy of this celebrated synthesizer and its inventor, Dr. Bob Moog, live on. 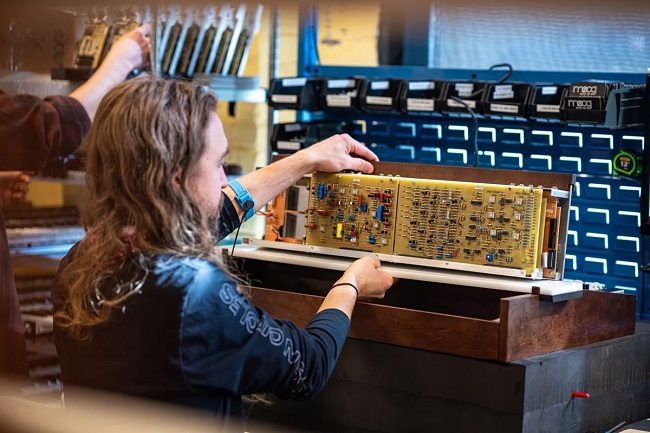 Hand-Built to Last a Lifetime

At the Moog Factory in Asheville, North Carolina, every Minimoog Model D synthesizer is built by hand to its original factory specifications.

Placing the utmost importance on high-quality materials, all components are carefully sourced and crafted to capture the indescribable feeling of the original Minimoog Model D. Each unit that travels through Moog’s production floor sees identical component placement and through-hole design of the beloved 1970s Minimoog Model D in a hand-finished aluminum chassis, secured to a handcrafted Appalachian hardwood cabinet.

“This attention to detail in materials and build allows us to connect directly to the legacy and character of this legendary instrument. The Minimoog Model D is more than just a collection of circuits in a box—it’s a true musical instrument that is a joy to program and play. Bob [Moog] always recognized the importance of an instrument’s feel, and we’ve gone to great lengths to honor his practices through the re-introduction and manufacture of this beautiful synthesizer.” -Steve Dunnington, VP of Product Development at Moog Music

Video: The Will Gregory Moog Ensemble Performs with 10 Minimoogs

In collaboration with Moog Music, the Will Gregory Moog Ensemble presents “Archimedes Screw,” a live performance from 10 musicians—each using their own Model D to add layers of sound to the composition as it builds.

From the onset of the video, the stage is set: a mix of vintage and modern Minimoogs line the chancel of The Mount Without, a historic chapel in Bristol, UK. The acoustics of the space provide a warm depth to the sound of Minimoogs produced from every era they have been manufactured.

Utilizing MIDI integration for the 2016 and 2022 reissues, and MIDI-to-CV converters for the vintage units involved in this performance, the Moog Ensemble highlights the modern features alongside the classic sound. According to the group’s musical director and composer, Will Gregory, the instrument’s enhancements expand Model D’s realm of sonic possibility.

“The MIDI aspect of these instruments enables us to open polyrhythmic possibilities between the 10 parts that would be beyond humans to reproduce otherwise. Our hands become free for sound sculpting as we perform by manipulating the filter, resonance, modulation, and envelope controls in pairs. Both these aspects are very important to how I see the Moog Ensemble breaking new ground in live performance and simultaneously giving a more expressive and warm creation.”

“Archimedes Screw” demonstrates Model D’s timeless sound, playability, and relevance as a powerful musical tool for live performance. The Moog Ensemble manifesto, Gregory shares in an interview with Moog, is very much about live performance as a living breathing unit of musicians listening and responding together.

Will Gregory discusses his connection with the instrument and shares more details on how the ensemble composed this piece from a technical perspective on Moog’s website here.

Goldfrapp’s Will Gregory is one of the UK’s leading advocates of using synthesizers and electronic instruments to create new sounds and reinvent old ones. Leading and performing with the Moog Ensemble since 2005, Gregory and its rotating contributors—which includes Adrian Utley of Portishead—perform a mixture of specially composed music, transcriptions of classical works, and their own versions of music from popular culture and film scores.

“Archimedes Screw” will be featured on the debut Will Gregory Moog Ensemble album, coming out via Mute Records in 2023. 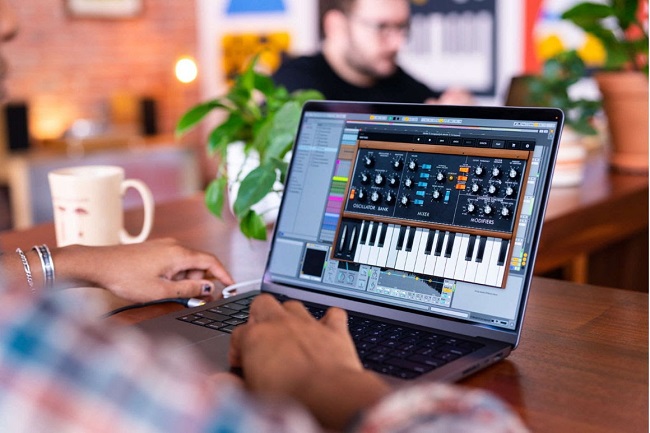 You can explore the sound and workflow of the classic Model D from your iOS or macOS device with Moog Music’s official Minimoog Model D app.

The Minimoog Model D App is a mobile transmutation of the world’s first portable synthesizer, the Minimoog Model D. Optimized for both iOS and macOS, anyone with an Apple device can jump in and play with over 160 included presets or begin exploring electronic sound design to craft their own unique style.

Hand-built by employee-owners with care inside Moog’s single factory in downtown Asheville, North Carolina, the first production run of the latest Minimoog Model D reissue is now shipping to Moog dealers and distributors within the US and internationally.
Moog Music is the world’s leading producer of theremins and analog synthesizers. The employee-owned company and its customers carry on the legacy of its founder, electronic musical instrument pioneer Dr. Bob Moog. All of Moog’s instruments are assembled by hand in its factory in downtown Asheville, North Carolina.
All images courtesy of Moog Music.
Bernie Worrell of Parliament Funkadelic on a Moog (it really heats up around 1:45...):
electronic music Mini Moog Moog synthesizer music